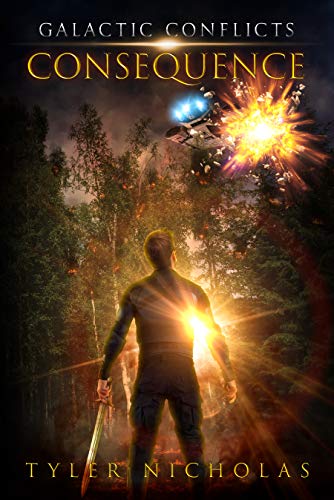 Galactic Conflicts – Consequence was released on July 23rd, 2020 by Tyler Nicholas. This is the third of five books. If you click on the image above it will take you directly to the store to buy. Below is a description.

Three years have passed and the Prazore continue their conquest of the galaxy. To make matters worse, Vorka unleashed a horrifying new creature that has the ability to track and kill magic users. Even with the Empires help, the Alliance is struggling to push the invaders back, causing many to wonder if the Prazore are about to claim victory in this long and bloody war.

There is still hope as the Alliance retakes the planet, Meradis Prim, opening up a secret warp space route to the planet Lorett, where supreme leader Valin is being held captive. After much deliberation, Kane volunteers his squad, the shadows, to infiltrate Lorett, rescue Valin and get out. There are many perils on this mission, one that will force Kane to make a tough decision that will decide not only the fate of his squad, but the future of the war.